Most people think that ‘healing with nature’ means that we use therapeutic means taken from nature, as in classical herbal medicine, aromatherapy or balneology. But naturopathy has a much wider and often a different view. A quotation attributed to Hippocrates describes the core of the naturopathic therapy. «The most effective medicine is the natural self-healing power inherent in all of us. »

Acupuncture uses needles, homeopathy uses variously processed remedies and bioresonance therapy uses electrical devices. However, their aim is the same, to use the inner healing power. Naturopathy stimulates and regulates the human physiology and the ‘inner physician’, in order to treat and heal. It makes use of the ability of humans to get well on their own. This is a fundamentally different view of therapy than the usual therapeutic approach of the conventional medicine.

A little bit of theory is necessary to explain this fundamental difference.

If people suffer from dermatitis or eczema, they tend to treat it with cortisone cream. They might use also Tea Tree Oil as a more natural alternative. Yet cortisone is a hormone produced by the body and a quite natural product. What is the difference from the naturopathic point of view?

It is not so much what we use, but how we use it. Cortisone and Tee Tree Oil will not heal the inner process leading to the dermatitis. They just suppress the symptom. Thus, both are somehow the same. The principle of naturopathy is to induce an inner healing process. Then the symptoms will vanish. A symptom is not the problem, in the first place. It is an indicator that the organism does not function appropriately. A real therapy has to work differently.

The three pillars of health

Health is based on three main pillars, nutrition, exercise and sleep. This is the basis of a naturopathic therapy since the time of Hippocrates. Medical treatment of any kind comes later. 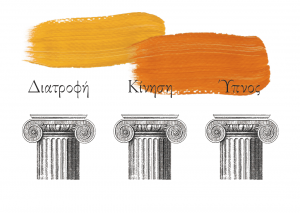 A few benefits of body exercise are

The only thing needed to get all these benefits is some exercise. A consolation for lazy people is that the benefits of the two other pillars (nutrition and sleep) are in many points the same.

Yet people prefer to take pills instead of having a bit of exercises, good nutrition or good sleep. Having a bad lifestyle, many people end up taking a lot of pills. Older people take the drugs of the elder, younger people take vitamins, proteins or hormones. Here two typical examples of my everyday practice:

Experience tells that it is impossible to cut even one of this medical cocktail. Although people say “I don’t like to take pills “, they react with panic if I propose to stop one.

However, most of these drugs would be superfluous if people would have only one pillar to support them.

Is it heathy to take all this?

Taking more than three drugs leads to interactions in the body nobody can foresee. Today drugs have become one of the leading causes of premature death in Western countries ranking third (or fourth) after tobacco, accidents and heart attacks. In Germany there had been 20 million emergency treatments in 2014. About two million had been due to adverse drug reactions.[1]

These drugs do not only a lot of harm. The benefit they provide is much less than the effect of the pillars of health. Moreover, supplements and vitamins taken from pills are far less effective than the same from nutrition[2] and taking supplements for a longer time tends to be unhealthy and harmful.[3]

Many people take drugs from the class of the beta blockers. They are beneficial for a lot of diseases from hypertension to glaucoma. One of the side effects of these drugs is that they reduce the reactivity towards warmth, the ability to adapt to heat. That is, during a heat wave people taking these drugs are more prone to have severe side effects or even suffer from heat stroke.[4]

Naturopathy has the contrary aim. It improves the ability to react appropriately, even and especially under changing conditions. This is called robustness or resilience. Naturopathy has not the aim to improve one symptom or function, but the function in general. This shall be demonstrated with a cold shower.

The lesson of the cold shower

Cold showers are an important part of folk medicine, but also of balneology. Their effect has never been rigorously investigated but are known to have a lot of health benefits.

How is this done?

The cold shower is a stimulus inducing a complex reaction of the body with many impacts on the neurological and the endocrinological system. One of its effects is that cold creates warmth. We see such kind of paradoxes often in naturopathy.

The cold shower (stimulus) needed to induce such effects is different for everybody. What is good for one person might be harmful for another. Moreover, after a few showers things change. The reaction is no longer the same. This is called adaptation.[10] Then the coldness or duration of the shower must be changed, the stimulus has to be increased.

The induction of adaptation is the aim of naturopathy. Therefore, a naturopathic treatment is a process.

To induce an adaptive process in a patient is a complex and often difficult venture with continuous changes. It has its own rules and many different phases. We want to see rhythms, alternating processes, ups and downs.

The therapy is based on certain stimuli, like a cold shower or body exercise. A well-designed stimulus tends to challenge the organism and induces a change. The organism must react. This ability to react and to be in a better state afterwards is called hormesis. Hormesis is a process leading to a better inner balance with a better robustness/resilience.

Classical drug therapy has a very different philosophy. It tends to force the organism into a certain state of function with less symptoms, and to keep it in this pharmacologically induced state. It is a kind of suppression. An adaptation is not intended. Adaptation is rather seen as an unwanted side-effect.[11] The ideal is that the reaction to a drug can be clearly defined and reproduced whenever liked. This is the opposite of the treatment with stimuli.

Another criterion of classical pharmacotherapy is that doubling a dose should lead to the double effect. This makes no sense in the naturopathic view. If a cold shower of 2 min is fine to create the intended effect, doubling the dose should not and will not have the double effect. In contrary, we will reach a point where the cold shower is no longer beneficial. The human will not be able to adapt anymore. No warmth will be the result. This point of change is called phase reversal. After the phase reversal the cold shower will lower the body temperature. It will lower the temperature somehow according to the expectations of drug therapy: doubling the dose will double the effect. This effect is seen in distress in sea where people must stay a longer time in the cold water.

But distress in sea cannot be compared with the idea of a cold shower in the morning. The logic is different.

We might distinguish the reaction of the body to a stimulus or a drug into two phases, one before the phase reversal and one after.[12] 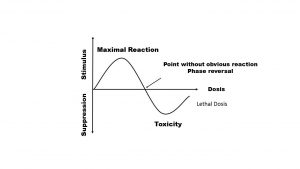 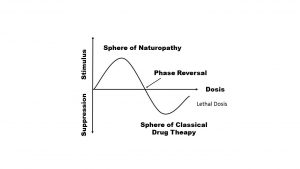 Both phases have different processes and side effects. They constitute a different therapeutic world.